The documentary, set in the Federico Fellini media school in the San Basilio district in Rome, tells about the training courses for a group of teenagers and what it means to be teachers in uncommon contexts such as those in the suburban schools. 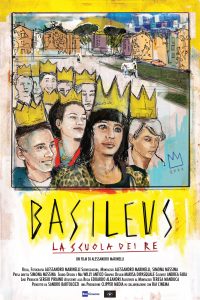 A production
Clipper Media with collaboration of Rai Cinema

A journey into class life through choral voices and faces that show us an incredibly dense world to discover, exuding the vitality of teenagers, hopes, dreams, but also burdened with difficulties, fears and uncertainty towards the future.In this microcosm, the strong and peculiar relation between teachers and pupils emerges, all different in their identities and personalities: the first engaged in educating, inventing methods, tools, actions, within a didactic scheme based not only on formal models of teaching but, above all, deeply intertwined with neighborhood life situations and real and individual experiences experienced by students; the latter inclined to represent themselves in a scene that is not fiction but a mosaic of fragments of raw reality, true life, rebellion, resistance, expressed with the language of the word and body, often instinctive and grammatically incorrect but always incredibly vital.

One of the figures that has brought us into this world is Professor Maugeri: an illuminated and enlightening mind, he teaches geography by attributing little importance to the boundaries of the territories, His peculiar approach to teaching means that this is well received by the kids, always stimulated to imagine that there is a beauty to be discovered and appreciated somewhere in the world, despite the dirty squares and the plaster of the palaces that characterize San Basilio.

He does not lose patience with the students but regrets seeing them defeated before embarking on the adventure of life. Some of them feel the school as a compelling obligation and they do not see any possibility of emancipation in it, experiencing it on the contrary as an impediment. Many seek to appear carefree, to conceal under the smile a more intimate discomfort, but they are excited to try to explain what they feel to Professor Maugeri who becomes so their mentor.

If you lose the toughest kids the school is no longer a school. It is a hospital that cares for the healthy and rejects the sick.
Don Lorenzo Milani.

From this assumption comes a long research work that questions the role of public school in Italian society, especially in difficult contexts such as those of the suburb.
The outskirts of the big cities are places where, using Pasolini’s words, “there are lumps of alive, imperfect, disorderly and free humanity.” Exploring its microcosm means, in a sense, to describe the complexity of our present, the direction that Italian society is taking. In fact, in the “class” universe, there are already all the dynamics of our contemporaneity.
To tell the world of teenagers realistically and without forcing, I decided to follow my characters without the use of face-to-face interviews.They move spontaneously within the classroom and the contexts in which they are used to living; I look at them in order to capture real and immediate sensations and emotions.The overall portrait of boys and their lives is gradually composed through their voices and actions. The way of observation, in this sense, seemed to me the only expressive way possible in interfering with that dense and varied context that is the world of school.

The film, therefore, is primarily a dive into class life that points to the actuality and complexity of the issues dealt with in it and, together, to describe the delicate passage from adolescence to adulthood. Within this story, there are so many protagonists, boys and teachers who I have decided to tell, because each one represents a different and unrepeatable soul, and because through this corality we tried to emphasize the complexity of their lives and of their growth paths. 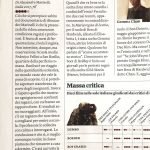